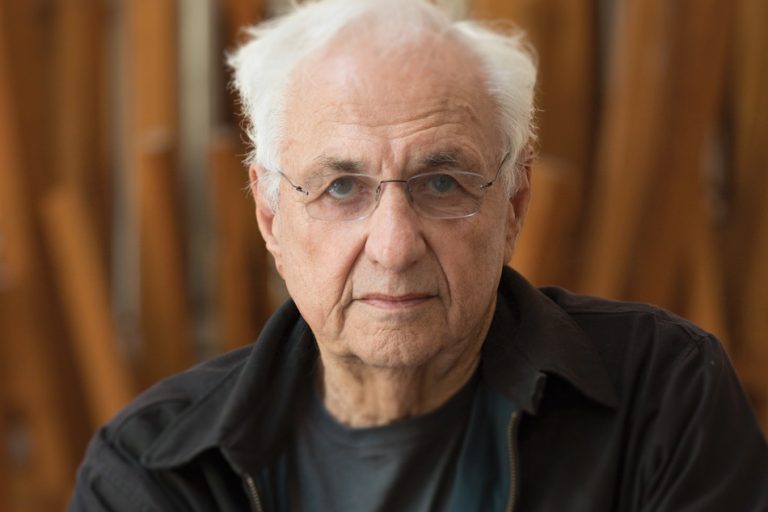 
Architect Frank Gehry has designed some of the most iconic buildings of the past two decades, from the Guggenheim Bilbao to Facebook’s new mothership in Silicon Valley. Yet in recent years, he has become something of architecture’s bete noire, lambasted for his extravagant, sculptural style in an era of razor-sharp efficiency, sued for alleged design errors, and mocked for butting heads with journalists. Misunderstood genius? A new biography from Paul Goldberger—Vanity Fair‘s architecture critic and prolific writer—suggests as much, painting a portrait of Gehry as a shy, sensitive man who’s grappling with self-doubt and ego in equal measure.

Goldberger has been covering Frank Gehry since the 1970s and is no stranger to his work. Building Art(Knopf, 2015) isn’t a catalogue raisonné, but a narrative about the pivotal moments in the architect’s life: failing at his first marriage, experiencing anti-Semitism, flunking a few college classes, and working as a truck driver. The 450-page book reveals the personal backstory that informed the body of work as a whole and dives deep into the most important commissions of the octogenarian architect’s life.

“You always function better as a critic when you can put things into a context, but one can only contextualize so much when you’re writing about a single building,” Goldberger says. “When you’re looking at the whole of a life story, it’s all about context. Context is the whole thing.”

We spoke with Goldberger about Gehry’s motivations, celebrity in the architecture world, the myth of his totalitarianism, and Gehry’s cameo on the Simpsons. What we learned will surprise you. 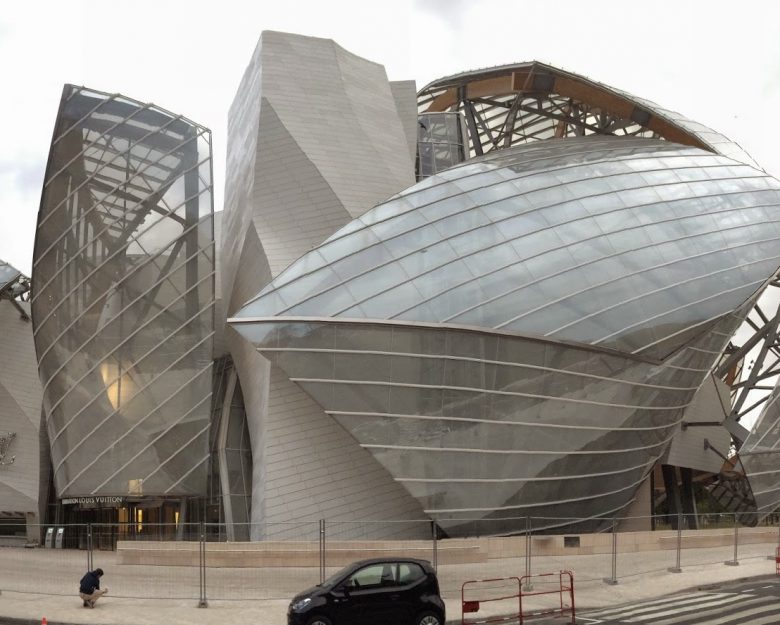 1. Gehry is plagued with self-doubt, but has an ego to match
“I’ve always liked him, liked his work, found him an intriguing character as well as a great architect,” Goldberger says. “I knew the basic outline to his life, but where did his odd combination of confidence and insecurity come from? This is what marks him—this determination to go his own way and innovate in a powerful way combined with an openness about his own self doubt. That’s a rare combination. Where all that came from and how it came to be was what motivated me most of all.”

2. His early life was filled with pain and struggle
“People will say I want my whole story told, warts and all,” Goldberger says. “But it’s one thing to say that and it’s another to look at it in black and white in front of you.” 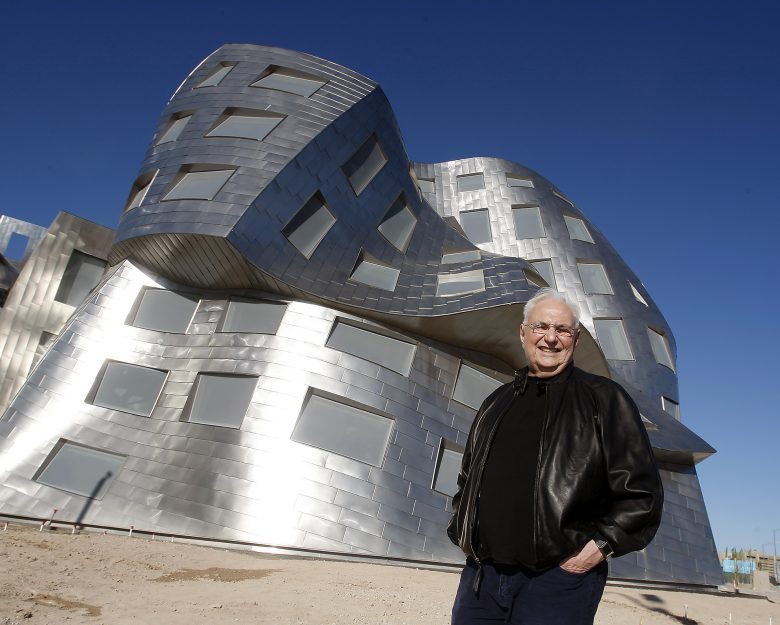 The book candidly speaks about Gehry’s poor behavior to his first wife, Anita, and his children from that marriage (he withdrew emotionally from his family and was rarely around, and both he and Anita had an extramarital affair); and his difficult relationship with his father, an itinerant man who struggled to provide for his family. Goldberger let Gehry review the book for factual errors, but the architect couldn’t make any editorial changes.

“He said, ‘I’m having a hard time getting thorough the book not because of anything you said, because reliving some of that stuff is really painful.’ I think for Gehry, reading it reminded him of all that stuff, which is painful. But he absolutely to the letter honored our agreement and basically said, the pain of reading it is his problem, not mine. It’s accurate and there you are.”

“Gehry’s not somebody who’s ever been convinced that he has the answer or that there is an absolute answer,” Goldberger says. “I think it contributes to a quality of his work that is not often understood enough. Because his buildings are unusual, he’s widely misread as somebody who creates these crazy shapes and then basically crams them down people’s throats, take it or leave it—the whole prima donna thing. That’s absolutely the opposite of who he is. He goes through multiple iterations of every project and it’s not only his thinking but he’s very, very eager for feedback from clients and for dialog with them. The one thing he asks from a client is that they have a fundamental respect for his work and belief in his work.”

4. Gehry’s work is not “autocratic or arbitrary architecture.”
Gehry is misunderstood as an architect who only cares about form-making and Goldberger says that this intersection of imagination and problem-solving is the best way to understand his work.

“He’s very, very concerned with function—he cares about where the toilets go,” Goldberger says. “And where you come in, where you go out, and where the closets are. It’s not an autocratic or arbitrary architecture. It’s an architecture that has its own formal language, but within that language he’s interested in solving problems, not just making shapes. His imagination is never in doubt—because everyone sees that when they look at his work—but what’s not often enough understood is that he wants to locate his work where the line of imagination and the line of problem solving cross. First, it’s where all architecture ideally is—but too often it’s not understood as such. It’s too often seen as either or and by both sides too: those who consider problem-solving to be an intrusion to their freedom as creative figures and those who see creativity as a license for indifference to problem-solving. And both are wrong. The fundamental nature of architecture is that it is both of those things together—if it’s going to work—and I think Gehry very much represents that.” 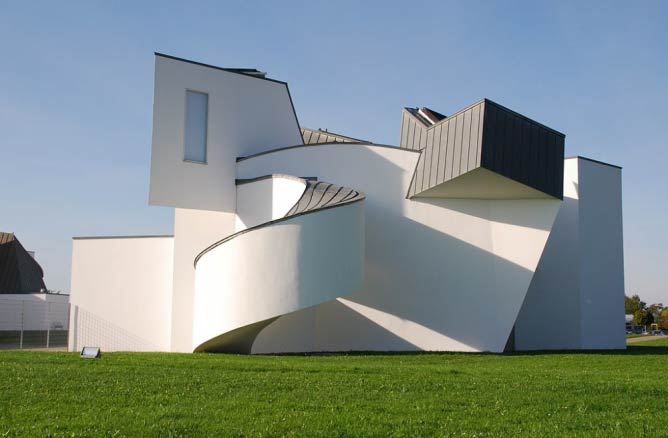 5. Much of his strongest work came before Bilbao
Gehry’s design for the Guggenheim Museum in Bilbao, Spain, is indeed his most famous. In the years after it opened in 1997, it transformed the ecumenically depressed city into a thriving tourist hub. His buildings since then have received significant praise—and criticism—but before then, he created a number of unsung masterpieces that have fallen into the shadows.

“One that’s always been one of my favorites, that’s not new at all, is the Loyola Law School in Downtown L.A.,” Goldberger says. “He made almost an Italian piazza, a little village out of some simple buildings. A lot of his explorations of ‘building as village’ are really still very powerful and convincing today. The Winton House, in Minnesota, is another one. It looks almost like a still life of shapes. The whole group from the mostly 1980s, but a little before and after, of ‘the project as village’ have been overlooked in the bedazzlement of buildings like Bilbao and Walt Disney Concert hall and stuff like that.”

An early adopter of computer-aided design, Gehry is known for buildings that would be impossible to engineer with analog methods, but Goldberger calls out the Vitra Design Museum—constructed outside of Basel, Switzerland, in 1989—as another building that deserves more credit than it receives.

“It’s a building that’s too often overlooked,” Goldberger says. “It was the last of the pre-technology buildings, but it’s a really lovely little thing. You can see his ideas really take flower. It’s like a bud almost, it just hasn’t burst out yet.”

6. He regrets his Simpsons cameo, but wields his celebrity for good causes today
In 2005, Gehry guest starred in an episode of the Simpsons in which he created a concert hall’s form by crumpling a piece of paper and directly translating that into a structure.

Gehry received public and critical acclaim simultaneously, which made him a pop-culture icon. “Starchitect is on one level a ridiculous term and on another level it’s not so bad because it’s a reminder that the public is interested in and cares about architecture, and it’s become more central to the cultural discourse than it once was,” Goldberger says. “I think the starchitect phrase and persona encourages misreading [of Gehry’s work].”

Gehry initially balked at his celebrity and scrapped his successful Easy Edges chairs—a line of cardboard furniture from the late 1960s and early 1970s that showcased the sculptural qualities of humble material—in fear that he would be labeled as a furniture designer and because (moreover, the prices rose, going against his aim to create affordable pieces). He steadily became more comfortable with fame and guest starred in a Simpsons episode in which he designed a concert hall for Springfield.

“I think he now has some regret about the Simpsons,” Goldberger says. “I think he did it at first because he was too flattered to say no. There’s a side of him that’s definitely got a lot of ego, and I think that side was excited like a child with the invitation and was unable to say no. The whole plot line—which is very funny of course—where he crumples up this piece paper, throws it on the ground, and looks at it and says, ‘Aha! It’s genius! This is it! This is the idea of the building!’ and designs the building around the crumpled paper is one that caused him grief because people ultimately thought this is how it works in reality. He was unintentionally encouraging the very misreading of his work that drives him nuts.”

Today, Gehry is using his celebrity to get worthy projects off the ground, like a children’s mental health center in Watts, which he’s designing pro bono.

“He knows that his name being attached to it is going to make that project possible whereas if it was done by somebody else, people might not put any money into it,” Goldberger says. “He can leverage his celebrity to some social benefit, he’s become more sophisticated in doing that, and more eager to do so. He’d rather use his celebrity for that than the Simpsons. That sort of evolution that has come relatively late in life to him.”

7. His roots as an L.A. architect are still reflected in his work

While Gehry’s recent work includes a flashy winery in Spain, a scintillating gallery for Louis Vuitton, and a prismatic museum in Panama, his roots as an L.A. architect remain visible. (In his early years, he built his reputation on “cheapskate architecture.”)

“There’s still a respect for a kind of basic rawness that goes back to his L.A. beginnings and a desire to find beauty in certain everyday ordinary things,” Goldberger says. “I don’t think they manifest in the same way as they did before, of course, they’re a couple layers removed. There’s no question that there’s a through line in all of the work, but like all great artists who have great careers, it evolves and has multiple phases. If you look at Frank Lloyd Wright, if you look at Le Corbusier, Picasso, there are through lines but there are also distinct phases. The later work builds on what came before but is not identical by any means.”

8. Gehry and his first wife Anita lived down the street from Michael Tilson Thomas and would babysit him when he was a child.

In 2003, conductor and composer Michael Tilson Thomas commissioned Gehry, his erstwhile babysitter and later friend, to design a hall for the New World Symphony, which he had founded. Located in Miami, the building opened in 2011.

Gehry’s surname at birth was Goldberg, but he changed it at the request of his wife, Anita, much to his chagrin. The letterforms mimic the shape of “Goldberg”—same first letter, peaked in the middle, and letter with a descender at the end. “By making the name change into an exercise in design, Frank made the whole business at least somewhat more palatable,” Goldberger writes in the book.