Airport architecture: The 12 most beautiful airports in the world


At its worst, airport design is a confusing blend of bad carpeting and claustrophobic paneling that can leave you searching for hours for a bathroom. But a new class of airports are leaving the dark terminals of the past behind, opting instead for light-filled spaces that provide both function and inspiration.

High-design airports are now scattered throughout the world, with big-time design firms like Foster + Partners, SOM, and Grimshaw tackling head-on the challenge of moving millions of people through spaces that need to be more secure than ever.

To see just where airport design is headed, we’ve rounded up the 12 most beautiful airports currently operating around the world. From Denver to Mumbai to Osaka, this is architecture taken to new heights.

Light streams in through the concave external glass walls, and each cocoon houses cafes, bars, stores, and amenities, like a children’s play area. Diamond patterns on the atrium floors mimic the wooden shingles of the cocoon. The airport can handle more than 5 million passengers each year. 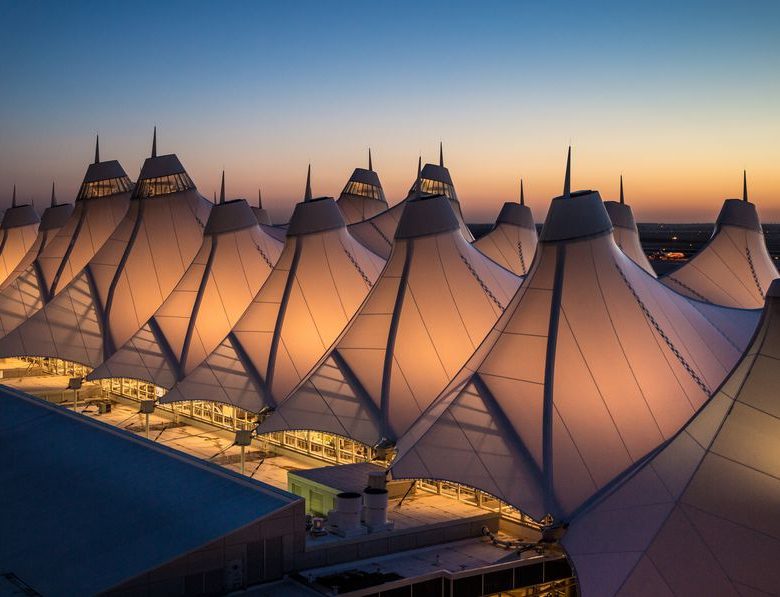 The tents of Denver International Airport as viewed from the Westin Hotel in April 2017.

Airport architecture in the United States often leaves much to be desired, but Denver’s fabric-covered tents are a highlight in a sea of boring design. Designed to mimic Colorado’s snow-capped Rocky Mountains, the tents look striking at any time of day—but their soft glow at sunrise and sunset is especially captivating.

Recent construction added a new Westin Hotel to the airport, and travelers can also now take a train directly from the airport to downtown Denver. 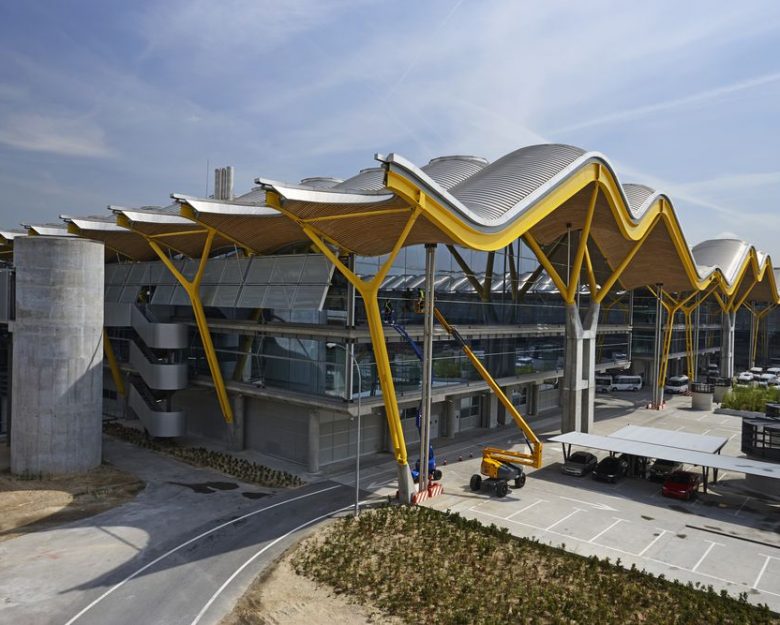 Located just 12 kilometers from the center of the Spanish city capital, the Barajas Airport received an upgrade in 2006 thanks to an addition by architect Richard Rogers that doubled the size of the airport.

The structure’s unusual wave-shaped roof is supported by central “trees” that punctuate the roof to provide natural light throughout the upper level of the terminal. Bright reds and yellows offer a welcome departure from the standard gray and white used in most airport color schemes, and the roof also provides much-needed shade to combat Madrid’s hot summers. 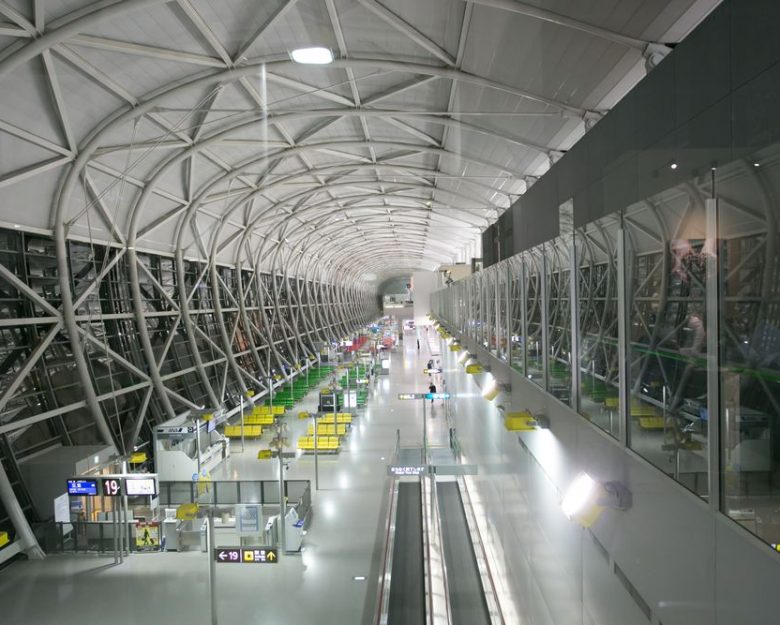 The terminal of Kansai International Airport.

Opened in 1994 to relieve overcrowding at Osaka International Airport, Kansai International Airport was designed by Italian architect Renzo Piano. Built on an artificial island in the Bay of Osaka, it’s the first “ocean” airport in the world and can handle 100,000 passengers a day.

The extra-long terminal — the longest in the world at the time it was built — stretches 1.7 kilometers with 42 boarding gates and a large curving roof shaped like an airfoil. The structure was specifically designed to handle Japan’s frequent earthquakes, and just four months after opening, the airport survived the 6.9 Kobe earthquake with minimal damage.

The waiting hall in the T3 terminal of the Beijing International Airport.

At two miles long, Terminal 3 of the Beijing International Airport is one of the largest buildings in the world. Opened just in time for the 2008 Olympics, this structure features a striking design — created by architects Foster + Partners — that uses the traditional Chinese color scheme of red and yellow and a dragonlike form to celebrate Chinese history and culture.

The terminal building and transportation center together enclose a floor area of 1.3 million square meters and were designed to accommodate 50 million passengers each year by 2020.

Terminal 2 at the International Airport in Mumbai.

Designed by Skidmore, Owings & Merrill (SOM), Mumbai’s new Terminal 2 building opened in 2014 to accommodate the city’s growing influx of visitors. A gigantic roof canopy references the form of vernacular Indian pavilions and is the centerpiece of the design.

In total, 30 mushrooming columns connect to the canopy overhead, with patterns inspired in part by India’s national bird, the peacock. SOM also sought to respect the traditions of local cultures—curbside drop-off zones are “designed for large parties of accompanying well-wishers [to] accommodate traditional Indian arrival and departure ceremonies.” 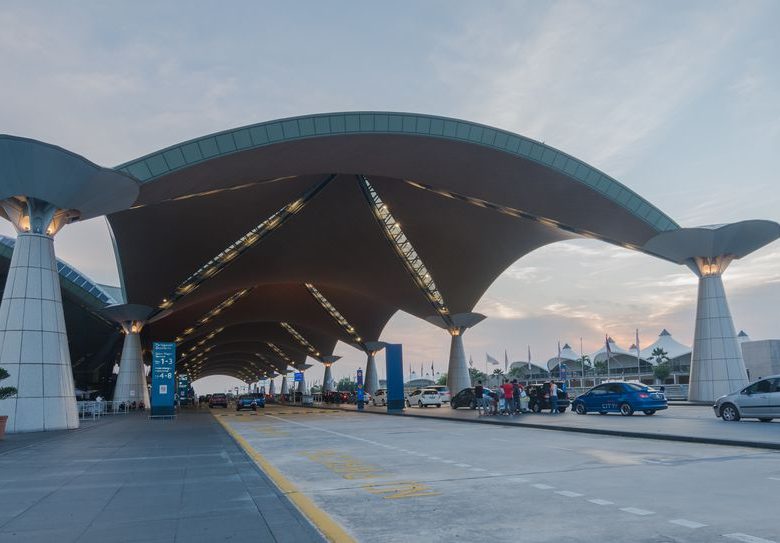 Kuala Lumpur International Airport (KLIA) is Malaysia’s main international airport and one of the major airports in South East Asia.

One of the largest airports in Asia, the Kuala Lumpur airport, designed by Japanese architect Kisho Kurokawa, incorporates an Islamic-style shading roof anchored by massive columns. The roof is also reminiscent of a common tree in the Malaysian rainforest, and the lights on the canopy represent the filtered sun that shines between leaves.

Kurokawa’s “airport in the forest” design demonstrates how modern design—the shell-like roof is made with sleek stainless steel—and cultural traditions can blend together. The airport also features a series of prayer rooms throughout.

Exterior of the airport of Marrakech Menara in Morocco

Completed in 2008, the terminal extension of the Marrakech Menara Airport in Morocco—designed by Swiss Architects E2A Architecture—uses a gorgeous facade that has become a hallmark of the airport. Light filters into the space by arabesques made up of 24 rhombuses and three triangles.

Clad in white aluminum panels and featuring stylized Islamic ornamental designs, the structure gives the terminal a brightness that changes according to the time of day. It’s also an excellent example of how a contemporary building can incorporate traditional cultural motifs.

This small airport located in Kutaisi, Georgia, was designed by the Dutch architecture firm UNStudio. The firm wanted to help passengers navigate the airport, building a bright red corner to act “as a crossing-point and point of recognition.”

Large windows create a light-filled interior with views of the Caucasus Mountains, and a golden, wood-like structure in the center of the terminal provides a meeting point for passengers. Architect Ben van Berkel designed the building with a large span, open spaces, and high ceilings—a nod to the great railway stations of the past.

The first airport project designed by the Rome-based architects Massimiliano and Doriana Fuksas, the new Terminal 3 building at Shenzhen Bao’an International Airport in China was built to look like a manta ray from above.

The three-level concourse and roof are wrapped in a white double-layer skin perforated by honeycomb-shaped metal and glass panels. This allows natural light to filter through to the inside, and the honeycomb pattern and futuristic white coloring are consistent throughout. 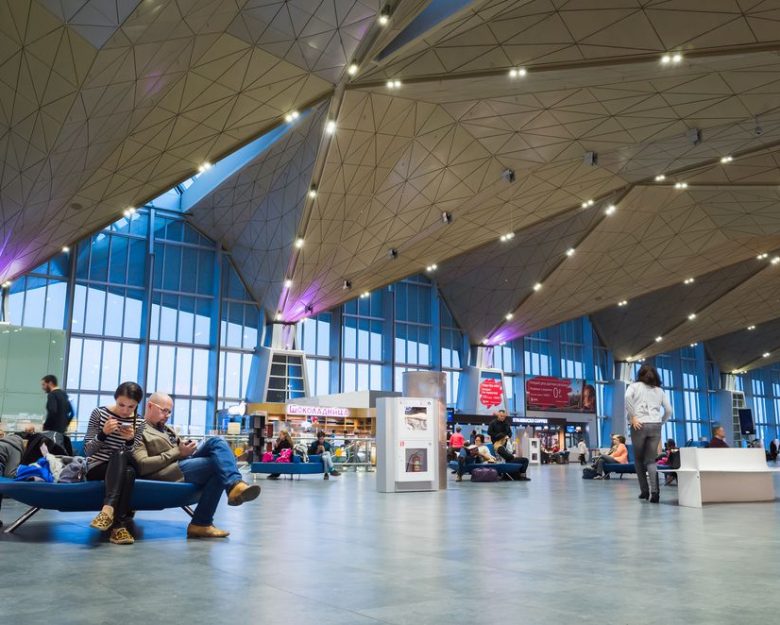 Passengers waiting to board in the new terminal of the Pulkovo Airport.

Completed in 2014, the Pulkovo Airport in St. Petersburg is expected to receive about 12 million passengers each year. London-based architects Grimshaw designed the airport with a large flat roof that can withstand the weight of heavy snowfall. The roof’s underside is a series of folded surfaces that help distribute the weight to different parts of the structure.

Inside, golden metal panels reference the gilded spires of St. Petersburg churches, and lighting fixtures run along the folds of the panels. Voids between the panels reveal skylights that provide light and help guide passengers from place to place in the terminal.

The underside of each dome is embossed like the surface of a leaf, and browns and creams match the color scheme of the surrounding desert. Each dome provided a modular unit for construction and will allow the airport to easily expand in the future.

Know of an airport that you think deserves to be on this list? Let us know in the comments.