At the end of 2017, the Royal Garden View project will open the final phase of the final VIP apartments of the project. The project is one of the first projects by GK Archi Myanmar in Yangon designed in 2012.

Located at U Htun Myat Road in the heart of the city. The five-star Sheraton Hotel is under construction and the University of the Great Victory University College, Yangon. On the first sale day of 2013, we, the Vietnamese Architects of Archi Group of Myanmar remember the scene of the people squeezed each bag to deposit even though the new project was designed concept First. An indication of the explosion of the Myanmar property market at the time. Then the value of the project was high but the attractiveness of the project was not reduced. 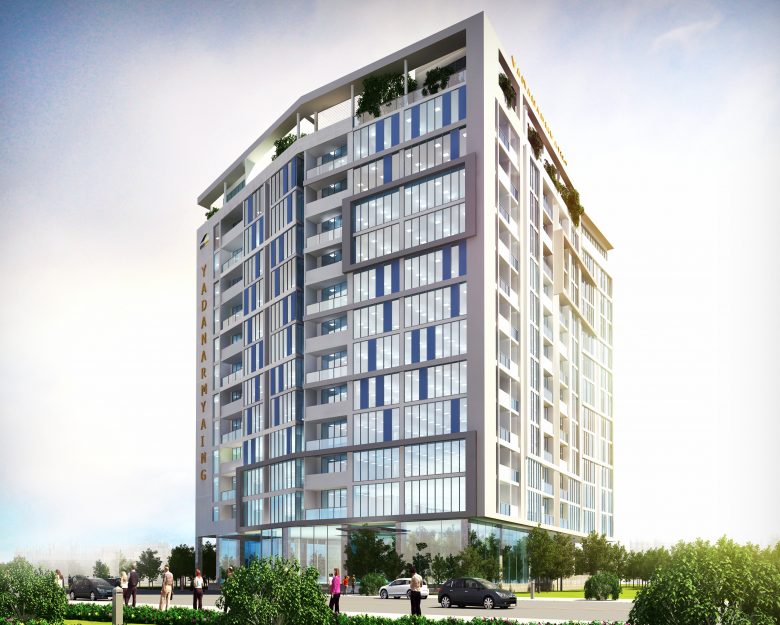 Perspective of the Royal Garden View project in Yangon, Myanmar

So far, one of the first projects of GK Archi is in 2012 to early 2018. The primary market for condominiums in Yangon has grown from 19,300 units to 213 projects (GK Archi designs over 8% of these projects), of which about 6,500 apartments from 149 projects are selling.

The average selling price is US $ 2,800-3,000 per square meter, up 10% year on year. Housing prices in Yangon are relatively higher than other cities in the region due to limited supply and high construction costs.

Apartment law was first announced in January 2016 allowing foreigners to buy a condominium in Myanmar to purchase up to 40% of the total units of a building from the 6th floor.

The emergence of more and more foreign investors and new laws to assist foreigners buying houses has boosted sales and improved product quality. Moreover, with a population growth rate of about 2%, Yangon shows that demand for housing will increase.

More than 3,200 apartments will enter the market from future projects (more than 1,500 apartments from the Sky Complex project designed by GK Archi for the first three phases) have been recorded and many projects have failed. clearly in the next few years.

The potential is still there but with projects that are not really clear and the policy tightening as well as difficult approval from YCDC and PA, plus the low supply of land for the project, the growth is stable or not. is a vague prospect. For five years, since GK Archi set up offices in Yangon, housing, office rental and apartment prices have surged. The price of an office for rent in Yangon is even higher than Singapore. Land prices for some major roads have risen to an unprecedented $ 8,000 to $ 12,000 per square meter, as in the Pyay or Kabay Aye Pagoda. Where land prices have risen more than 100 times in just five years.

Compared with Ho Chi Minh City, where GK Archi has extensive project design experience with dozens of projects underway and under construction. The Yangon market still looks like an attractive, dynamic, fast and impulsive girl compared to the stubbornness, excitement, and control of Vietnam’s largest city. But the impetuosity of a beautiful girl is a force for us to jump in and continue the direction of her here.

Write for 2018, to recall the first project, to look back on the market with full of optimism and vision for 2018, at which time GK Archi’s office is continuing to shifts for two major projects in this market.

And a message “Get the most out of the GK Archers …”