The rare place where “Made in Vietnam” value is appreciated 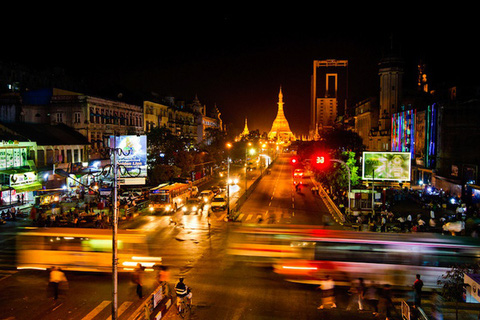 View of Yangon – the largest city in Myanmar – at night.

“The last gold mine in the world awaiting exploitation”, many international investors have given the country the words have wings. The population of over 50 million people, most of whom are businessmen, can use English, abundant resources, and the lifting of the US embargo has created an attractive market. international business people.

Strong purchasing power and strong growth, but Myanmar’s domestic consumer goods meet just over 10% of market demand. Therefore, essential items are imported from neighboring countries and have a high retail price, more than 10-30% compared with similar items in Vietnam.

Not surprisingly, when the banners advertise fairs in Japan, Korea, Thailand … always surrounded the main street. The 4-5 star hotels that are quite rare in Yangon, the largest city in Myanmar, are always crowded with traders from Japan, Korea, China, Thailand, Vietnam and many other countries.

Myanmar is a rare market where Vietnamese products or intellectual contributions from Vietnam are highly valued, and “made in Vietnam” is considered a symbol of trust. This exciting event was created from the pioneering steps of leading Vietnamese companies in the areas of consumer goods, real estate and design consultancy.

Starting from the Hoang Anh Gia Lai building, located in the prime location of Yangon, up to the present time is still the most luxurious building, some of which became the symbol of the city. Then successive successes of other big companies, such as Vinamilk milk, Thinh Phat cable, Vina fan or contractors such as Hoa Binh construction, GK Archi design consultants, Quan Dat aluminum glass, contractors Furniture AA …

By the end of May 2016, Vietnam’s mobile phone network Viettel officially received the investment license, becoming the fourth network in Myanmar. With the investment capital of up to $ 1.5 billion, and the experience full of emerging markets, Viettel will likely continue to reap the success of its own way.

Many Myanmar businessmen in discussions with the writers have expressed their expectation about the breakthrough of Viettel, which they say will create a revolution in prices and services for the mobile market, to shorten The distance between Myanmar and the outside world.

“Made in Vietnam” is not just a hat or a long dress, not just a bowl of noodles or iced coffee, but Vietnamese pure products with high added value. And many of them took the lead.

The Vietnam Expo, which was held in the last days of 2016 in Yangon, brought together more than 100 Vietnamese enterprises, attracting the attention of local people and business partners. Few guests left the fair without carrying some Vietnamese brands on hand: Hanvico pillow cushions, Hang Dinh instant noodles, Dien Quang electrical appliances, or Vinamilk milk cans.

Not only is the game of the big guys, the small and medium companies of Vietnam also find their playground. For example, Ruler – a stable automatic product “stable wear” of Vietnam has officially entered the Myanmar market right after the fair, through a large partner. Ruler’s showrooms are being built in the country’s two largest cities, Yangon and Mandalay.

Green Leaf Lentils manufacturer also signed the contract with distributors in the early days of meeting with partners. In this place, the rate of smokers is very high, so the garlic products filter technology for smokers smokers are interested in.

Or right on the sideline of the fair, a large Myanmar distributor thanks to writers looking for suppliers of air-cooler products in Vietnam. The contract can be concluded as soon as possible with the appropriate supplier.

But with Vietnamese brands, sustainable development is still a matter of course, with the fear of counterfeit goods, poor quality goods produced by Vietnamese companies, which are sure to enter the market. school.

At the Vietnam Expo, there were at least two products branded “same same” of a brand name Vietnam has.

The competition in Myanmar will be fiercer in the future. This is not just the participation of Thai, Indian, or Chinese producers in the domestic market. Another formidable force that will surely change the game in the near future is the participation of over 10 billion Burmese billionaires living abroad and in the country. Myanmar is a country with a large number of billionaires and quite mysterious. And to start, a project worth several billion dollars invested by Burmese billionaires was kicked off and the same project partner, GK Archi, China. Notably, this design consultancy firm in Vietnam has won many design contracts in Thilawa urban area invested by Myanmar and Japan.

With a well-established network and a growing investment climate, billionaires in Myanmar will find ways to connect their home markets and global supply chains.

Therefore, the bell rang, but please “shoot” is responsible! For the sustainable development of the Vietnamese brand in this rare and precious market!